Detailed explanation of the internal structure of acoustic guitar

Detailed explanation of the internal structure of acoustic guitar 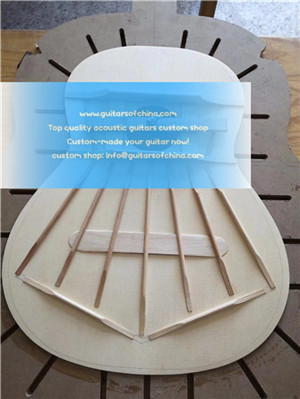 Internal structure of acoustic guitar
The sound played by an acoustic guitar is the result of the complex refinement of the numerous parts inside the instrument. What does the different parts affect Jiu Na Na? How does the luthier adjust the sound quality of the guitar? The most important part is the design, materials, or manual techniques. Guitar makers have been arguing over these issues for centuries. 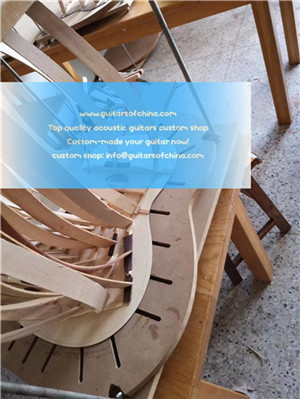 Acoustic guitars are sensitive and versatile instruments, and are constantly being modified and improved by the makers and musicians. The classical guitar we are currently seeing has only 100 years of history. The history of jazz guitar is 100 years. Nowadays, the super popular acoustic guitar has only 70 years of history. Modern luthiers pay more attention to the details of the structure and shape, and are committed to the scientific principles of guitar sound. Similarly, the materials used to make guitars are also changing the number of man-made materials in guitar making.

The goal of the luthier is to make a musical instrument that transforms the energy of the strings into wonderful music. 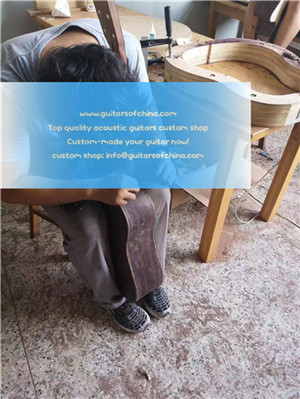 To achieve this goal, the first thing to do is to design the panel. This is why the luthier gives more attention to the material and support beams of the panel. Of course, all parts of the guitar play the same role as the panel for the sound of the guitar. The backboard, side panels, neck, fingerboard and silk have different effects on the sound, but the panel plays the most important role in the process of converting the string vibration and air vibration. Spanish guitarists used paper to make the back and side panels of the guitar, which largely proved the importance of the panel to the guitar.

The role of the guitar panel is striking in order to make it react quickly to vibrations. The weight of the panel must be very light and the panel is subjected to a pound of tension, which requires the toughness and strength. The panel should be able to adequately reflect the kinetic energy of the strings, but its vibration must be controlled within a certain range.

In addition, the panel is also an acoustic equalizer for the strings, which enhances certain notes while filtering out other notes. It can be said that the panel is the touchstone for judging the skill of a luthier.

In the constant exploration, the luthiers and musicians found that the longitudinal section of spruce, cedar and mahogany was the best material for the panel, followed by mahogany and acacia. Various scientific data show that these woods are high in strength, light in weight, moderate in density, and good in sound transmission. These factors can maximize the energy consumption and convert the kinetic energy of the strings into acoustic energy.

Of course, the best debate about which kind of wood has not yielded definitive results, but it is like arguing which kind of dish is the best, and there will never be a consensus. Every luthier will create a musical instrument with a unique sound quality with a specific piece of wood. The difference in wood does not affect the guitar's pronunciation function.

In fact, a good luthier can make a great guitar with any kind of wood.

After numerous trials and setbacks, the luthiers found that installing a support beam on the guitar panel would enhance the strength of the panel while reducing its weight.A variety of structural support beams control the vibration of the panel. Therefore, installing the support beam is also a work that needs to be carefully measured and adjusted to reduce the
vibration of the guitar. The volume is reduced, and the strength of the guitar is not enough. If the stick is too tight and the amplitude is reduced, it is difficult for the bass of the guitar to show that the effect is too loose and the guitar will make noise.

In the past two decades, innovations in the structure of support beams have emerged in the classical guitar world.

The laser hologram shows that the vibration frequency of each part of the guitar panel is different, which also causes the sound waves to cancel each other out. Many modern violinists have performed various experiments on supporting beam structures and panel thickness in order to better control the vibration of the panel.The earliest guitars used trapezoidal support beams with reinforced beams on both sides. A panel without a support beam is easily deformed, which is probably one of the reasons for this support beam design.

At the end of the century, European luthiers began experimenting with the use of fan-shaped support beams in Spain and France. Through this change from trapezoidal design to fan design, the luthiers realized that some of the support beams acted as "sound bars". These support beams not only connected the guitars, but also affected the sound quality through the vibration of the control panel.Molecular biology professors and classical guitar enthusiasts have done some scientific research on the effects of different string frequencies on acoustic guitar panels. In close cooperation with the late luthier Richars and the stringer Steve, a new support beam structure was designed. The support beam of this structure is similar to a speaker and is divergent.

There are many different support beam structures, but the above are the most common. Most luthiers will modify the design of the support beam to better integrate the panel and the back panel. If the material of the panel is relatively stiff, the support beam can be mounted slightly lighter and vice versa. The support beam should match the characteristics of the wood and the type of guitar. Some manufacturers make small guitars with woody wood to strengthen the bass, and wood hard woods are used to make high-pitched sounds with guitars.

The internal structure of the guitar, the tension of the strings and the enclosed internal space all have a certain resonance frequency. The closer the resonance frequency is, the less energy it needs to vibrate. The echo is like Steve Martin wearing red shoes, not staring at it.

The traditional guitar neck is a chicken tail. At that time, people's theory was that only the neck was firm and strong enough to conduct energy to the piano. But now there are also many guitars that use screws to hold the neck and body. The luthiers did not say anything special about this guitar. Of course, if the neck joint is loose, it will inevitably lead to the loss of energy and the impact on the sound. However, as long as the neck connection is strong enough, its installation is insignificant.

As a musician, if you can understand how the guitar works and accept the flaws in design and construction, then you will get more. The contradiction that the luthiers have long faced is that they want to make a light instrument that can respond even with very small movements, but the guitar must be strong enough to counter the strong pull of the strings. A good guitar must be maintained. If you want beautiful sound quality, then take care of the fine structure and it will follow the season. Changes in humidity and temperature. At the same time, the wood will slowly deform under the constant tension of the strings.

Whenever I see a good acoustic guitar, I will be amazed at its manufacturing process and performance. In our lives, the guitar not only reflects the most original beauty of the wood, but also aesthetics, sound effects, design and response.The perfect combination of use, of course, resonance is not a measure of how good a guitar is, but it can appropriately increase the characteristics of the sound.

Acoustic guitars are collections of various resonances. The strings themselves are efficient resonators. The player's plucking of the strings can produce different vibration amplitudes. This is the panel and back of the guitar determined by their own weight, length and tension. The board has a primary resonant frequency. The neck of the main resonant frequency guitar also has a resonant frequency when bent and rotated. Every piece of wood inside the guitar has its own resonance frequency, although the frequency tends to be the same when they are glued together. Of course, anti-resonance phenomena also exist. At some points, the vibration frequencies cancel each other and decrease. On some instruments, the resonance of a part can absorb the vibration of the strings and the muffled sound.

The acoustic resonance of an acoustic guitar is important for the output of sound. The speaker acts like a resonator, enhancing the bass of the instrument by connecting the sound hole and the outside air. Adjusting the volume of the air inside the guitar is one of the ways the luthier adjusts the bass echo.The tone of an acoustic guitar is the result of its internal resonance and anti-resonance. Each factor affects the sound of the guitar. The problem facing the luthiers is to organically unite all the vibrating parts so that they retain their respective characteristics while producing a harmonious sound.

The material and processing of the neck and fingerboard affect the tone, strength and continuity of the guitar and bass. However, during the production of the acoustic guitar, the luthier made some neglect of the neck.

The neck of the guitar is subjected to the tension of the strings, so it must be strong enough to be unaffected by this pull. More and more luthiers use new materials to improve the performance of traditional wooden necks.Dana once added two metal rods to the support rod of the mahogany neck, which increased the strength and increased the weight of the neck. Some luthiers would install a graphite rod inside the neck, which would increase the strength without increasing quality.

The fingerboard also affects the guitar's tone. The most common material used for fingerboards is ebony, which is dense, hard, flat, and has low resonance. Of course, the less common Brazilian rosewood is still the traditional fingerboard material, which is more explosive than ebony. Indian Rosewood and Maple also have their own sound quality characteristics.

Even the seemingly less eye-catching factors, such as the size or flexibility of the silk, can affect the sound quality of the guitar.The fingerboards of acoustic guitars generally have a radius of curvature of about one inch, and some electric guitars have even larger arcs, which can reach inches.

Previous page:  The role of guitar in the band
Next page:  Development on Chinese fingerstyle guitar
Skype Contact Now